Ski resort ratings for Lermoos compared to all other ski resorts. Based on 156 reviews.

Holidayed here for about 5 years in the late 80s and early 90s, last in 1993 and then againn last year. I remeber when there were only 2 (single ) chair lifts to the middlestation (on the sites of the present Hocchmoos express and the gondola and aonly on single chairlift to the topstation. The was no grubig alm piste! How things have changed. The biggest loss is the nursery slope in front of the Hotel Tyrol, but the new apartment block will have direct acess to the remaining nursery piste (we will be staying the this year). Last year the weather was very warm but skiing wa still available every day and the upper slopes were in excellennt condition. Non-skiers in our party were disappointed
More reviews 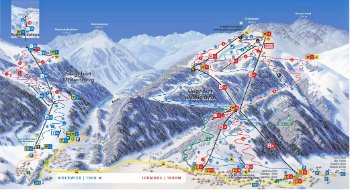