Ski resort ratings for Kuhtai compared to all other ski resorts. Based on 169 reviews.

I went on a cold, windy day when the resort was lacking in snow, yet it wasnt all that bad. Its family-oriented, so expect long lines of wobbly kid skiers snaking down the mountain behind their "follow me" leader. Im a teacher by profession, but I could have done without the hazards of kids such as the one who not only attempted to sit in the same spot as my wife on the chairlift, but also became stuck at the stop and almost got the four of us dragged to death. But I exaggerate. Its a small, high-altitude place that looks like a lot of fun in the right conditions, especially given the wide, glacier- off-piste territory. Judging from the number of friendly local expats, it seems like it has a
More reviews 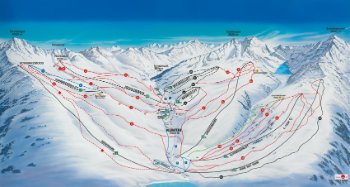