If you want to get the most out of your winter sports holiday, then Val Thorens is the place to be. Val Thorens has a warm, welcoming atmosphere and a breathtaking natural environment. All ingredients are present for an unforgettable world-class winter sports holiday. It is a pleasant and friendly place where both beginners and advanced winter sports enthusiasts can indulge themselves. The ultimate goal: to fully enjoy the high-quality slopes and superb snow conditions. The area literally and figuratively brings visitors to great heights. Whether it's winter sports, accommodation, or après-ski. It is hardly a secret that Val Thorens has been one of the world's top ski resorts for years. It has been regarded as the best ski village in France and Val Thorens received the top prize at the World Ski Awards for sixth consecutive times.

At the end of November - the winter sports season starts early in legendary Val Thorens - you are assured of three things. The first and the most important: an early-season relatively thick layer of quality snow. Val Thorens is the highest winter sports resort in Europe. Due to its high location (at 2300 meters), you are already assured of a good amount of snow in November. When mother nature can use a handful of help, the necessary snow cannons provide back-up. Val Thorens has a large water buffer and can therefore produce a lot of artificial snow. However, this is rarely necessary.

The second you can count on is a wide selection of accommodation; ranging from economic self-catering accommodation to the best five-star luxury hotels. The resort is only one square kilometer in size, but has appartments and hotels of different sorts and price class at its disposal. There are more than 25,400 beds for tourists. People sometimes tend to forget that Val Thorens also has many cozy chalets and chalet-style accomodation. What almost all accommodations have in common is the convenience of the so-called 'ski-in' and 'ski-out'. The majority of accommodations are located directly on the slopes, so you only have to strap-on your equipment and enjoy the endless ski opportunities right in front of you! 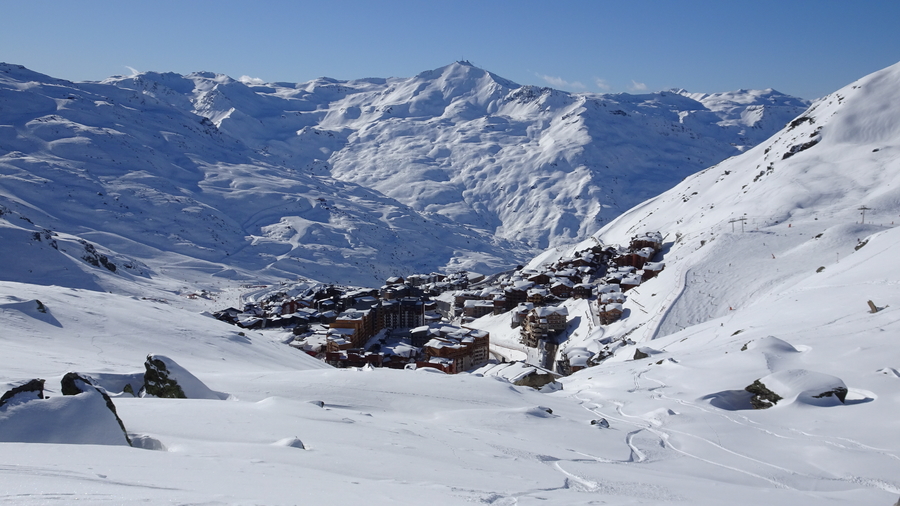 The heart of the town is focused around the top of a short slope equipped with a canopied conveyor-belt surface-lift, which enhances the ski-in/ski-out convenience. The main access road through the resort is bridged by a couple of pisted bridges that funnel a through-route piste via the down-town area, so slope users can simply glide through the middle of the resort to access all areas. At the front of the resort you will find an excellent gentle beginners’ area with canopied conveyor-belts and a drag lift. The beginner’s lifts are free of charge. In general, the beginner runs are all situated right in the heart of the resort in and around the nursery slopes and lifts. Progression will be on blue runs many of which are easy and wide so that beginners can gain confidence. A gentle set of nursery slopes around the Rond Point des Pistes provides an excellent training ground, with greens and blues off the Deux Lacs and Cascades chairs well positioned for graduation to the piste-proper. Intermediates will love the grippy, confidence-boosting snow on many of the runs above Val Thorens itself. And, the best thing? You don't have to worry as all these slopes converge into town. 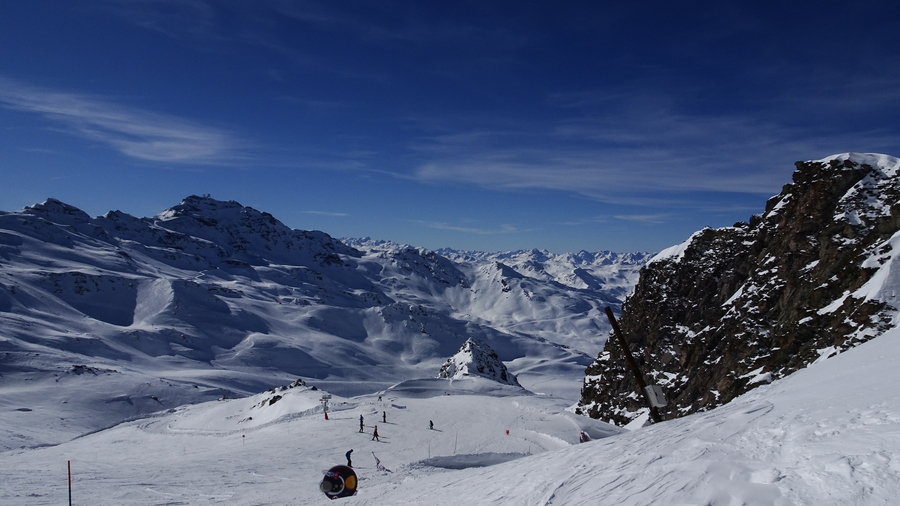 Val Thorens' ski area fans out over seven distinct sectors, including the mostly blue-classified slopes of the Col de la Chambre, where links towards Meribel-Mottaret and Les Menuires are situated. The high Peclet sector directly above Val Thorens, offers a handful of nice long reds plus a glacial black, while the narrow Pointe de Thorens sector at the head of the valley provides access to epic off-piste routes but also has a lovely long red-into-blue cruise back towards resort.

The principal twinned Rosael and Cime de Caron sectors form the bulk of the area, filled with wide high-altitude blues and reds plus some testing mogulled blacks. The 'fourth valley' sector of Orelle, over the watershed in the Maurienne Valley beyond the col de Rosael, boasts the highest lift-served point in the entire Three Valleys; and finally the usually quieter Boismint sector that overlooks the Vallon du Lou and runs down to Plan de l'Eau at 1800m, the lowest point in the Val Thorens ski area. 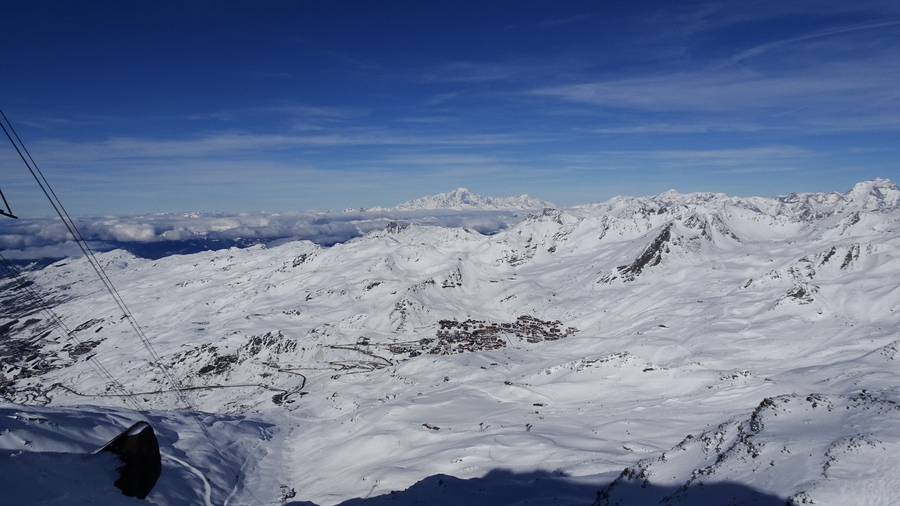 Val Thorens ski resort is not only the highest village in France's famous -600km- Trois Vallées linked ski area, it's also the highest ski resort in Europe; snow conditions are very reliable throughout a long season. SkiWeather.eu ranks Val Thorens among the best destinations in Europe for that matter. Val Thorens welcomes a whopping 6 to 10 meter of snow during the winter season and its altitude means its much less affected by mid-season thaws, too. Val Thorens' ski area is comprised of the highest and most reliably snow-sure sectors in France and makes for a superb late or early season skiing destination. In fact, Val Thorens is so sure that their resort will have snow from November to May, that they have a Snow Ski Pass Guarantee! 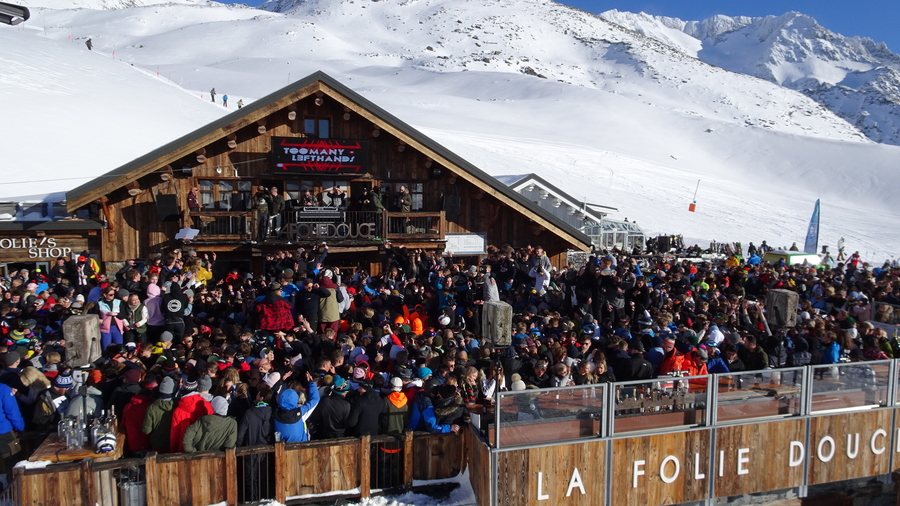 Val Thorens is a fairly big town, but a compact one nonetheless; its wide streets and covered walkways are pedestrian friendly and it has a good selection of shops, supermarkets, cafés, restaurants, bars and pubs, plus plenty of indoor facilities to cope with any inclement weather, mostly located in or around the big central Galerie Caron complex that houses a shopping mall and leisure centre. The leisure centre has a spa, swimming pools, a gym and fitness suite, squash courts, multi-sports hall plus a children's fun-park area. Several hotels also have spas that are open to non-residents. Other leisure options include ten-pin bowling, games arcades, and a cinema. For more active fun there's snowmobiling, mountain biking on snow, paragliding, paintball, an ice driving circuit, and an epic 6km toboggan run from the top of the Peclet gondola. 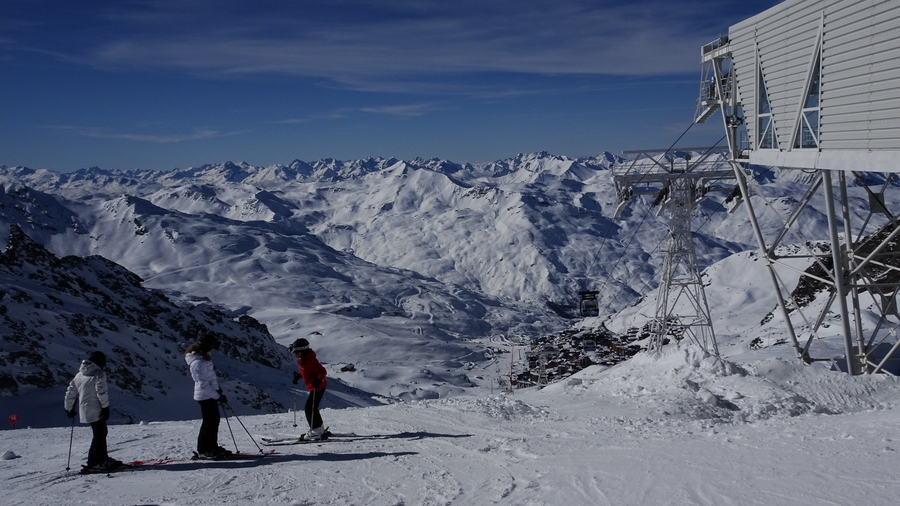 Nearest airport: Chambéry, 90 minutes (122km), Geneva, two hours and 30mins (200km). The nearest train station to Val Thorens is Moutiers which is about 45 minutes away by car or bus if you're staying in Val Thorens. A regular shuttle bus runs from the train station to Les Menuires and Val Thorens. More info: valthorens.com

During the winter season (mid December to 1st week of April) Eurostar runs both a direct daytime and a direct overnight train from London St Pancras or Ashford in Kent to Moutiers. The direct daytime Eurostar leaves London / Ashford on Saturday mornings and arrives around 7-8 hours later in Moutiers. Cross country trains also connect Moutiers to Paris Charles de Gaulle airport, changing in Lyon, which takes around 6.5 hours. If you're coming from Lyon Part Dieu (across town from Lyon Saint Exupery airport) you can reach Moutiers on the regional trains which takes around 3 hours. If you've flown into Geneva, trains change either at Chambery, Bourg en Bresse or Lyon and then onward to Moutiers, which takes around 3-4 hours.