This weekend the north-western Alps had to endure massive amounts of rain and unusually mild temperatures. The weather was generated by a warm front which dragged tropical air right across western Europe.  In some areas the rain/snow limit ascended above 2700m. Areas in the north-west where the heaviest precipitation was to be found were the French Alps; roughly north of Grenoble, the northern and western Swiss Alps. As a result of the downpours and the unusual temperatures the snow conditions have deteriorated fast. Even high-altitude ski resorts like Les Deux Alpes and Val Thorens were badly hit. At the same time, dry Foehn winds have resulted in extremely high early February values with locally 22°C in southern Switzerland.

This Monday the heaviest of the precipitation has shifted towards Austria, with a rain/snow limit somewhere between around 2200m.

The good new is that the worst is now behind us. The precipitation front is moving away to the east Monday night, bringing snow above 1200-1400m. Late night, a new front with cold unstable polar air flows directly from the northern Atlantic to the Alps, producing snow showers to increasingly low levels (mostly in the northern Alps) as the day goes on.

The first snow is expected in the French Alps early Tuesday morning. The temperature will drop swift and sharply, causing the snowfall line to drop to 1200 meters tomorrow, and probably even into the valley on Tuesday night. By that time the accumulated fresh snow will be around 15-30cm above 1500m. Dozens of centimeters of snow are anticipated to pile up across the highest peaks of the range. Snow will have the best chance to accumulate in the higher elevations of the Alps across southeastern France, Switzerland, northern Italy and Austria. By Wednesday morning we can quite widely expect 20-50cm of new snow above 1500m, with a few centimetres to as low as 500m in places.

This northwestern stau is very much needed to counterbalance the huge damage that has been done -mainly in the French and Swiss Alps- by the heavy rainfall. The persistent precipitation, soggy snow and high winds may once again result in high avalanche risk and substantial lift closures in the northern Alps.

Flurries will continue to low levels across the eastern Alps for a while on Wednesday before all areas see a return to fine settled conditions by Thursday he sun will return in the French Alps on Wednesday. Then it’s time for a few days with Kaiserwetter!

Colder air reaches the western Alpine region on Monday night. The influx of cold air is accompanied by heavy snow in the French Alps. It will give snow in the mountains above 1300m, then 1000m at the end of the night. This first disturbance will give 15 to 20 cm of snow at 1500m in the French Alps. The snow will soon extend to Switzerland and Austria in the late evening and early Tuesday morning. The snow level is initially somewhere around 1300 meters.

New disturbances are moving rapidly across the Alps from west to east. On Tuesday, much colder air rushes into the Alps from the west. As a result, the snowfall limit eventually drops to well below the 1000m. This second episode of snow fall can give between 20 and 25 cm in the ski stations in the French-Swiss border region at around 1000m.

The most snow is clearly destined for the French Alps next week. By the end of the week locally there will be in excess of 110cm. A lot of snow is expected in ski reosrts between the Mont Blanc region and Zermatt. Paradiski and Val Thorens may welcome up to 120cm at places. 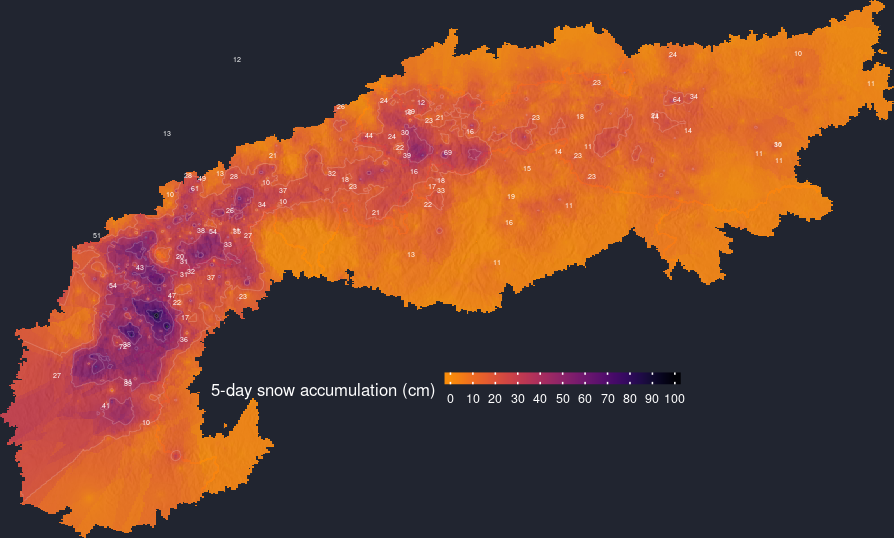